2002-present
Noah Lindsey Cyrus (born January 8, 2000) is an American actress & singer-songwriter. She voiced the title role in the English version of the 2009 animated feature film Ponyo. In 2016, she released her debut single "Make Me (Cry)", featuring vocals from Labrinth. Her debut album is set to be released in late 2017. She is the youngest daughter of Tish Cyrus and Billy Ray Cyrus and the younger sister of Miley Cyrus , Trace Cyrus, Brandi Cyrus & Braison Cyrus.

At the age of 2, Cyrus began her acting career, playing Gracie Hebert on the sixth episode of the television show Doc. She was a background dancer in the 2009's film Hannah Montana: The Movie, and played small roles in six episodes of the Disney Channel Original Series Hannah Montana. She appeared in the straight-to-DVD movie Mostly Ghostly, where she was spotted as a Trick or Treater. In 2008, her first movie role was in the English version of the anime feature film Ponyo, in which she voiced the title character. She sang the English version of the theme song to that film, performing alongside with Frankie Jonas.

On November 15, 2016, it was announced that Cyrus had inked a record deal with Barry Weiss' record label, called RECORDS, and later signed a management deal with Maverick under Adam Leber. She released her debut single "Make Me (Cry)" featuring Labrinth that same day. In December 2016, she released an acoustic performance of "Almost Famous". She was also featured on a song Called "Chasing Colors" with Marshmello and Ookay, which was released in February 2017. On April 14, 2017, she released another single, called "Stay Together", followed by the single "I'm Stuck", released on May 25, 2017.

Noah Cyrus (to the right) 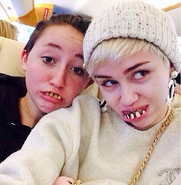 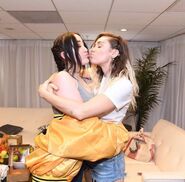